This giveaway is now closed. Congratulations to Lexie of Lexie’s Kitchen, she won a gift package from Stonehouse 27 and Lundberg!

Congrats to Jsv888, who responded, “I would love to try the unsweetened almond milk in my latte and on my sons oatmeal since we are both dairy free!” to the Earth’s Own + Whole Foods Giveaway. She is the winner! Now onto the next giveaway …

I know, it’s like giveaway central around here lately! I’ll have a killer recipe coming soon, but first … I received a fun challenge from Stonehouse 27 and Lundberg Family Farms, involving a review, a recipe, and a giveaway for readers. It wasn’t something I could pass up. For my part, I was required to pick one sauce, one Lundberg Heat n Serve Rice Bowl,  and add just three more ingredients to make a meal. Easy enough …

First, those extremely bold Stonehouse 27 sauces come in six varieties, so an initial selection had to be made. Alas, you would think (or at least hope) that sauces called Cashews & Cream would be thickened with cashew crème, but no such luck. I’ll have to work on making those two sauces dairy-free at home. Regardless, with four amazing flavors to choose from, I decided to whip up a gluten-free and dairy-free recipe with the Dates & Tamarind sauce. The label said that it goes well with two ingredients that I had on hand, pork and bell peppers (note: the dairy-free sauces are vegan, so you can easily enjoy them with just vegetables and/or tofu for a vegetarian meal).

Before adding the sauce I gave it a quick taste test, and boy was I glad I did! This stuff is SPICY! At that moment I decided to make my fifth ingredient coconut milk – something to tame the heat a touch and add a little richness to the final dish … 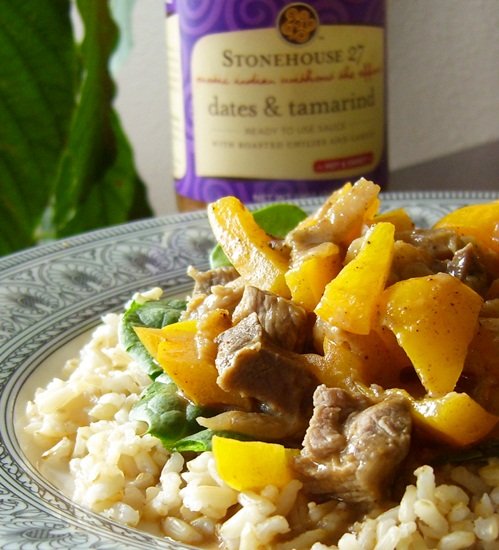 If they would have allowed 6 ingredients, my final addition would have been pumpkin puree. I swirled some into leftovers, with a wee bit of salt, and it upped the flavor to a new level. For vegan or vegetarian, use tofu.

A full review will be on its way on Go Dairy Free! But for now, lets get to that giveaway …

To Enter: Comment below and tell me what 5 Sauces you would select (you can get more than one of a single flavor if you wish!) and if you can think of one, what 5-minute recipe you would make first with one of these sauces!