Conferences & Expos for Bloggers and Foodies – GFAF, CDF, BlogHer Food and Your Thoughts

May was an insanely busy month for me, and while I like travel, three conferences in one month (right after we did a long distance move in mid-April) is a bit more than I can handle. They seriously wore me out. But I wanted to share my experiences with y’all here, and also get your feedback on conferences and events – what you enjoy, recommend, hope to attend … or not.

Gluten-Free Allergen-Free Expo (Chicago, IL)  – This event was incredible from a social perspective. The amazing AndreAnna of Life as a Plate “was my bitch” (her words, not mine!) for the event, which made it that much more fun. We cruised the expo on Friday, sampling everything that was dairy-free (for me) and pretty much everything for her since the entire expo was gluten-free. My stomach was hating me after that, but getting a taste of the various foods was pretty cool. It was a nice-sized expo, the food served for lunch was actually pretty darn good, and the dessert and drinks party for those of us who were presenting was fabulous. Talk about an amazing line-up of ladies – dozens of bloggers who I am friends with and admire (you all know who you are!). Oh yeah, and the desserts were pretty awesome too. I couldn’t get enough of the frosting on the cupcakes – seriously, dairy-free frosting people … like I’m going to hold back. Throughout the three-day event, AndreAnna and I worked together at the book table where I was honored to have several of my mentors signing books right next to me, and we had a fabulous time talking to the many conference attendees.

Celiac Disease Foundation Conference (LA, CA) – No, I don’t have Celiac and I’m not gluten-free, but lately, I’m beginning to think I’m an honorary member of the gluten-free community. I attended this event as an Attune Ambassador and really had fun handing out organic cereal and probiotic chocolate bar samples (yeah, handing out chocolate samples is REALLY difficult (insert sarcastic tone here)). It was great to talk shop with the varied group of expo attendees, and a few even bought my non-gluten-free book! They had what looked like some incredible speakers at the event, and the expo was very similar in style and size to the Gluten-Free Allergen-Free Expo. I only wish the trip hadn’t been such a whirlwind. I flew in the night before, worked the conference from 8am to 4pm, and flew out at 6pm. Next year I’ll make sure to book some extra time to hang out at Universal Studios.

BlogHer Food (Atlanta, GA) – I really enjoyed being on a panel (that’s me chattering away) at this event, seeing a few great blog friends, and meeting some new faces. I found some of the controversial posts on BlogHer Food fascinating. I definitely didn’t think this event seemed “high school” as several reported. Conferences do involve quick meetings and mingling, which can easily make it seem surface-y (particularly when there are groups of people who already know each other), but you have to take from the time what you can. I met some very wonderful people there, and never felt like anyone was rude. Just a lot of different personalities as one might expect. I did wish that the food during the event and the venue location had been better (Sarena of The Non-Dairy Queen (co-panelist and good friend!) informed me that there are some happening foodie spots like Midtown in Atlanta, but the event was hardcore downtown with virtually no activities, restaurants, or even people and it was the weekend!). However, I thought the after-party on the last day was pretty great, with much better food and a very lively atmosphere. Because the food and venue were so much better at the BlogHer Food in San Francisco, I have to give last year my top vote – but other than that, they were very similar. Overall, the BlogHer Food team is awesome, and I’m looking forward to seeing where they go next (Pick  Seattle! Pick Seattle!).

Straight-up, I won’t be doing three conferences (across the country no less!) in one month again if I can help it. By the third one, I was worn out, pretty impatient, and not able to mingle and enjoy the people as much as I would have liked to. I just wanted to be cuddled up at home in the northwest with my cat and husband. But, now that my exhaustion has worn off, I realize that I don’t want to write off these events forever. I just need to manage the time a little better.

Oh yes, and I’m not done yet! I will be speaking at the Fitness & Health Bloggers Conference in three weeks. I think I will be fully recharged for that one though.
After this month … I’m bound and determined to make it to Expo West in Anaheim next year, I’ve missed it Every. Single. Year. But from there, I’m keeping an open mind, and would love to hear your own thoughts on all of these events that seem to be popping up …

How do you feel about attending blogging and food events / conferences?
Are you attending any in the near or not so near future?
Any that you recommend? Or not? 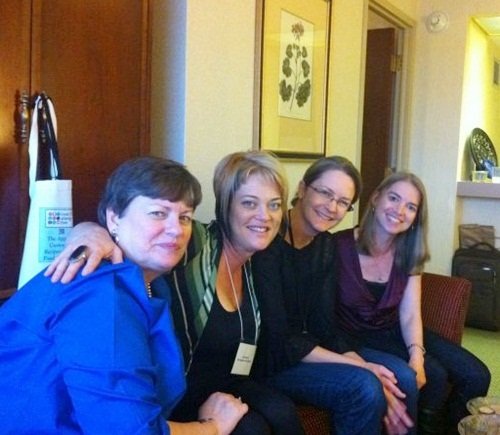 Shirley, Heidi, Alexa, and Me resting and noshing on healthy snacks at the Gluten-Free Allergen-Free Expo between events.

An Ode to Giveaways and Ecolissa

25 thoughts on “Conferences & Expos for Bloggers and Foodies – GFAF, CDF, BlogHer Food and Your Thoughts”