Don’t tell anyone, but my friend Katie confided in me that she wishes more people would offer feedback on her recipes. It was at that point that I realized I had only made one of her recipes in the past year and a half!

Unfortunately, keeping up with recipes for Alisa Cooks, Go Dairy Free, and my next book takes up a lot of my kitchen time. I often forget to make the recipes that I bookmark. I’m guessing that I’m not alone here. But also, I often forget that Katie’s blog, Making Food and Other Stuff, has recipes. (Sorry Katie, but here me out!) Beyond cooking and baking, that girl is wickedly talented … sewing, knitting, crafting … and she has a sarcastic sense of humor that I just love. Even though I definitely get food inspiration from her blog, I rely on it daily for giggles and belly laughs. Sometimes you just need a release, you know?

And what many don’t know is that Katie is also gluten-free. I’m not sure if her entire blog from way back when is gluten-free, but for as long as I have known her, not a bit of wheat flour has been sifted into her recipes.

Okay, time to get to the point … this month I have “adopted” Katie of Making Food and Other Stuff for the Adopt a Gluten-Free Blogger event, so that I would finally make some of her frickin’ recipes!

I started with a recent one that sounded so mental, that I had to know what it tasted like. Katie calls it a Sweet & Savory Pumpkin Sauce. It has ingredients like sage, cinnamon, mustard powder, nutritional yeast, and maple syrup all rolled up into one. The ingredients, when read together sound, well, less than appetizing. But, the end result was delicious! … 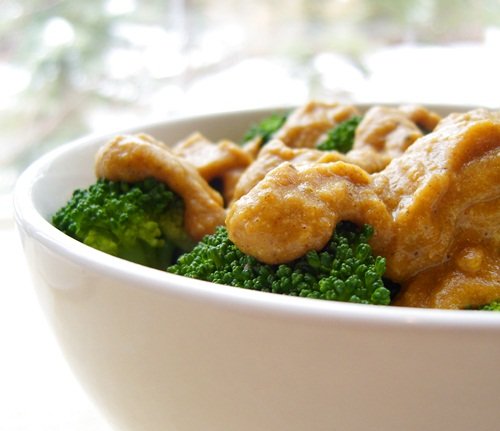 I wanted something more on the savory side, so I just used just 1/2 Tablespoon of maple syrup and omitted the stevia. However, I added in 1/2 Tablespoon of creamy unsalted peanut butter and 1/4 cup of water to thin the sauce, which was still quite thick (I liked this, as it clung to my veggies and rice – no runny sauce at the bottom!). Without the water, the flavors were a touch strong for me, but intriguing. The water and peanut butter (Katie, I think SunButter would be awesome too!) mellowed the flavor just enough, but also helped to meld the various components into harmony. It really was amazing … savory, a little sweet, and even a little spicy from the mustard powder. Oh, and she says salt and pepper to taste … I used a generous 1/8 teaspoon of salt and a few twists of freshly ground pepper, and devoured all of the “sauce” in one serving (I dumped the rest on after taking the picture – didn’t want to cover up those pretty greens before shooting!).

With the next recipe, Katie taught me something about myself. I was never a fan of chocolate growing up. I mean, it was okay, but I didn’t eat chocolate bars, I could easily pass up chocolate cake, and vanilla ice cream was always the winner. It wasn’t until my mid-twenties that chocolate made its way slowly into my food “likes.” But now I’m realizing that maybe it is the sugar, not the chocolate that I enjoy most. I dislike “bitter” in all forms … tahini, coffee, and low and behold cacao. Yep, those beans are a fairly close cousin taste-wise to coffee beans!

So I tried her Vegan Peanut Butter Fudge recipe, which uses unsweetened (bakers) chocolate and has the *option* of adding stevia. Holy moly, that girl loves cacao! 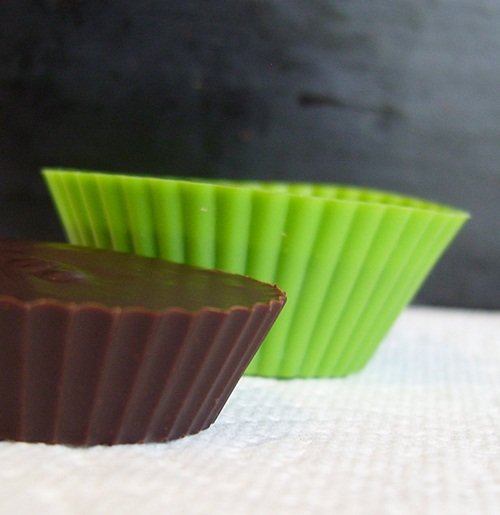 I made just a quarter batch, added 1/2 tablespoon of maple syrup, and 20 drops (!) of vanilla stevia and the cacao taste was still too strong for me. It wasn’t so much that I wanted something sweeter, I just wanted something to tame that flavor. I didn’t like the true chocolate taste. Now I’m wondering how much sugar is really in that 70% dark bar?

This isn’t to say that I won’t still enjoy some fudge, but now I have to evaluate if my chocolate love is really about the chocolate. You know what I’m saying? Perhaps, just perhaps, a sweets craving can be conquered with this knowledge. Perhaps. I’m not holding my breath here or anything.

Regardless, this is a great recipe, and one that you can sweeten (or not) as you please! I used creamy peanut butter in place of the peanut flour and almond milk, since I didn’t have any peanut flour, and the texture came out quite nice. Even with my little addition of maple syrup, it wasn’t too soft.

I do love that most of Katie’s recipes are quite low in sugar, if not sugar-free, and that she is a veggie-aholic like me (not that you would know it from all of the dessert recipes I have been posting lately!). I will definitely make more of her recipes in the near future (that woman is a genius with cauliflower!), that is, once I stop giggling at her posts.

Visit her site, you won’t want to leave – Making Food and Other Stuff

23 thoughts on “Making Food but not Other Stuff – Savory Pumpkin Sauce and Chocolate-PB Fudge!”