Going through our cupboards, I discovered several foods that have traveled with us through two entire moves … and I’m not about to let them make a big trek with us again! I’m cleaning out, and this means even those dried beans that have been with us so long that they could probably be considered common law family, have got to go.

I confess, I’m one of those people who will pop Trader Joe’s canned garbanzo beans (those things are just so good for some reason) in my cart knowing full well that a one-pound bag of dried ones is sitting at home. But I hate the planning and the hassle of dried beans. Soak, boil, etc.

Fortunately, there is an easy way … it still requires a little bit of planning, but only on cooking the first time … trust me, there will be loads left for convenience. Tony and I had been mentioned trying to cook the dried beans in our crockpot for some time, but the cleaning out mentality finally lit a fire under my butt. I am sure this isn’t a new concept – likely a search for crockpot beans on the internet will yield thousands of results – but it was something new to our house, and boy was it easy.

Here is my method that required less than ten minutes of hands on time and virtually no worries:

1) One night when you remember, place dried beans in a big bowl and cover with as much cold water as the bowl will hold. The beans do soak up a  lot, so I try to have at least double the amount of water as beans, if not triple. Place the bowl in your refrigerator, and leave the beans to soak overnight.

2) In the morning, drain the beans. See my note below, you may want to boil the beans for ten minutes at this point. From what I read, chickpeas are okay, but some other beans may be an issue. Now, place them in your slow cooker. Cover them with water adding about an extra 3 inches or more of water above the beans (they soaked up a lot overnight and will soak up more, but not quite as much). Turn it on low, and go about your day. They can cook for anywhere from 6 to 12 hours. I took the garbanzos out after 6, but they could have gone a couple hours longer. I did the pintos and blacks for a full 12 hours, and no problems – they cooked nicely but weren’t mushy. Drain the beans again, and let them cool.

3) Odds are, you have a boatload of cooked beans now. Pack any beans you won’t be using in the next few days into ziploc bags, push the air out, zip, and lay them flat in the freezer to freeze. Now, whenever you need beans, simply pop them out of the freezer! You can even boil them a bit to heat up and further soften, pop them in recipes as is, or even top a salad that you will be taking on the road (the beans will defrost but keep your salad cold!).

To note, you can cook various types of beans together. I cooked the pinto beans and black beans altogether, the only consequence was that the black beans “stained” the pintos so that they came out a darker color than normal pintos. I’m okay with that.

Note: Some beans must be boiled for at least ten minutes to kill toxins. We were actually boiling the beans after freezing, so no problems here. But you may want to boil them for ten minutes before placing in the slow cooker as noted on Wikipedia. 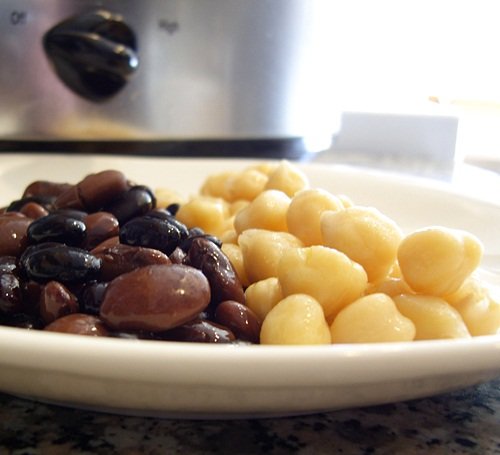