If you have read my review on Amy’s (vegan) Veggie Burgers, then you already know how the veggie burger bug caught on in our household.  To summarize, after we ran out of hamburger buns, I took AllergicGirl‘s burger salad lead and whipped up some lunchtime veggie burger salads.  My husband liked them so much, that he has begun requesting these meat-free salads a couple of times a week.  He stated how much lighter and better he felt after eating them.  The words “we might want to try out a vegan diet for a little while,” even left his lips.  I was truly speechless.  While we have not yet made the full conversion, meat is definitely making less of an appearance each week, acting more like a “garnish” than the base of the meal.

So… I couldn’t resist continuing the veggie burger trials.  With a $1.00 off coupon for Dr. Praeger’s Veggie Burgers (from the Mambo Sprouts coupon book), I picked up the Tex Mex variety at my local Trader Joe’s yesterday.  End price was $2.29 for the four patties.  Of course, with all of the wonderful things I have heard about the Trader Joe’s brand Masala Veggie Burgers ($2.49), I couldn’t resist throwing those into the cart as well. 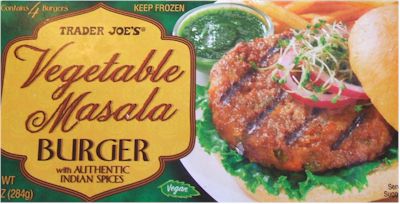 We arrived at home with bags full of groceries, yet when I offered my husband a veggie burger salad, he responded “that sounds great!”  I opted for the Masala burgers first, lightly cooked in some coconut oil (you could use whatever oil you like) on the stovetop for about five minutes.  I chopped them up, and sprinkled the bites atop a bed of arugala along with chickpeas (garbanzos) and mushrooms on my husband’s salad, and chickpeas, carrots, and green onions atop mine. 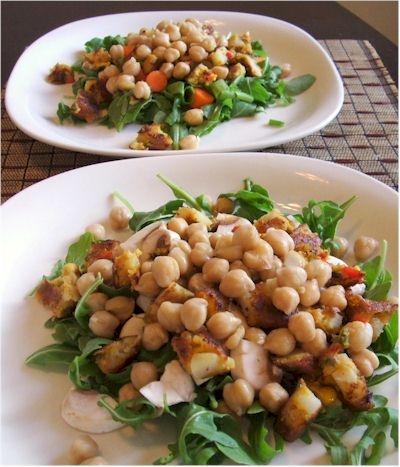 The burgers were good, they were full of flavor and had a nice warm spice that added some interest.  They were quite different from the other burgers we have tried, as these had a definite mashed potato base.  They held their own, not too soft and squishy, but my husband said he still preferred the Amy’s brand.  I was also a bit disappointed to discover that canola oil was the second ingredient, since this is a common GMO oil, and there are so many better options.  While these might go well bun-style, I think they may be a bit too soft.  Nonetheless, if you do opt for these during a barbecue, I would dress the bun with nothing more than some mayonnaise or vegannaise, as they have a wonderful Indian spice flavor that should not be overpowered.

Today I busted open the Tex Mex Veggie Burgers from Dr. Praeger’s.  First comment, they really could use some packaging consulting.  Well, the packaging itself was great, individual servings, resealable box, etc…. but the name “Dr. Praeger’s” coupled with a very frumpy looking, frowning doc pictured on the back, plus a less than stellar use of overall color kept me from even considering these veggie burgers in the past.  It was the coupon in the end that enticed me. Really, these seemed to be the veggie burgers I was looking for.  They are non-GMO, wheat-free (contain oat bran and oat fiber, and made in a facility that handles wheat) and really they were mostly veggie based, no textured soy protein in site.  In fact, whole little bits of vegetables and black beans dotted these “burgers.”  I did like the tex mex flavor, which was rather sedated, calm, and influential, lacking the barbecue sauce flavor of Amy’s Texas version.  They were generally tasty, yet something was keeping me from shouting, “wow.”  I think my husband stated it best when he said that the Amy’s veggie burgers taste richer.  I really wished some avocados had been on hand, as I think some sliced avocado along with our black beans and green onions atop some greens would have enhanced these burgers quite a bit, adding a touch of indulgence … but really, at $1.50 per avocado, I was definitely holding out for the season!

Considering they are also made with organic ingredients, I think the Amy’s brand is still on top in our household.  More specifically, we voted for the Quarter Pounder for actual veggie burgers (bun and all) and for the Californian and Bistro (gluten-free) burgers for general veggie burger and salad chomping.

Of course, true to my frugal nature, next on the horizon is making homemade veggie burgers!  In fact, I almost turned the falafels into a burger style.  It seems I was preparing.  There are two veggie burger recipes in Vegan Vittles.  I plan to give one of these a shot, but am still on the lookout for a more veggie-based, or even a mushroom-based burger.  Let me know if you have seen a good one!